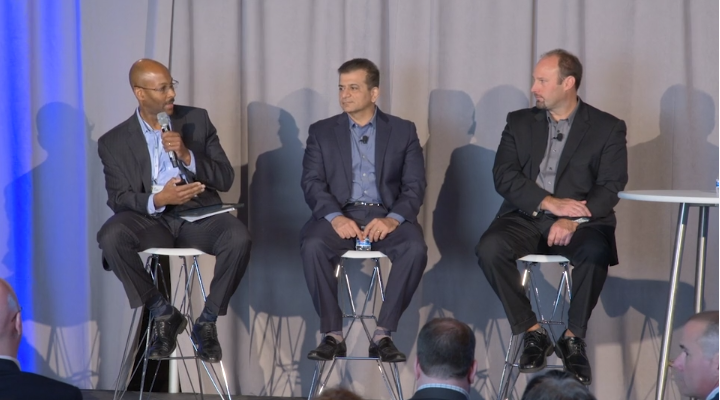 When you hear the term “blockchain,” do you think Bitcoin or Ethereum? Most people do. But blockchain has more potential business applications than as simply a cryptocurrency technology.

Blockchain is a digital ledger in which entries are linked together with cryptography, with copies of the ledger saved onto multiple, distributed computers.

The computers, or nodes, may be distributed across the internet or just within a single organization. Because each of the nodes contains the same version of the blockchain’s data, it’s easy to tell if one has been altered.

Security is a major strength of the blockchain technology, according to Rohit Tandon, CEO of blockchain company Chainworks.com.

“The main thing about blockchain is that it has many inherent security characteristics,” said Tandon. “You have cryptographic hashes securing the chain, multi-signing capabilities and distributed data. There are many things that make blockchain secure.” 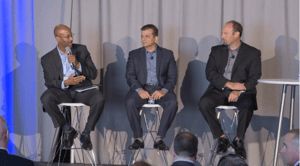 Tandon discussed blockchain security strengths and weaknesses in the panel How Safe Is Blockchain Really? at TierPoint’s BraveIT conference in Chicago.  Tandon was joined by two other blockchain security experts: Andrew Hacker, a professor of cryptography at Harrisburg University of Science and Technology and the founder of two smart data companies, and Jonathan Beckham, a lawyer specializing in digital transactions with GreenbergTraurig.

The Main Types of Blockchain

Permission-based blockchain has many potential business uses, such as for supply chain partners, proof of compliance with government regulations,  financial transactions or for legal contracts and communication between law firms.

Blockchain has several strong security advantages. One is its reliance on cryptography. Data is packaged into encrypted blocks, which are cryptographically linked to each other. Once a transaction becomes part of the blockchain, it can’t be altered without unencrypting the data blocks on top of it.

“If anyone were to change something in one block, we could tell because whole chain would be disrupted,” explained Hacker.

Another advantage is that blockchain is distributed. The same data is copied to multiple nodes distributed across the network. These redundant copies of a blockchain serve as checks against tampering.

Of course, as with any new technology, there are complications. While the blockchain infrastructure itself is reliable, other areas of the technology are more vulnerable. A prime example is the blockchain wallet, which holds cryptocurrency or other values. It’s not uncommon for hackers to steal money from account holders’ wallets. Another potential problem is with key management. Blockchain account holders each have a private encryption key.  If that key is lost, so is access to the account. That’s not a scenario that any CFO wants to risk.

“People lose their private keys. [That’s why] there are some four million Bitcoins that have been lost,” said Tandon.

Permission-based blockchain has an advantage in that all participants are identified and, therefore, accountable for their actions. For additional security, the hosting organization could integrate the blockchain with an identity access management solution.

Vulnerabilities in blockchain technology will no doubt be fixed in the future as the number of potential use cases—and business adoption—expands.

According to Tandon, two of the most promising enterprise applications for blockchain are supporting transactions between groups of partners and proving provenance for products, such as farm-to-table food products.

“A blockchain transaction can be anything, not just money but also products and services,” noted Tandon. “Also, blockchain is good at maintaining state changes and recording them on the chain.”

A related use case is that of smart contracts. Organizations might use blockchain technology to create self-executing contracts requiring minimal human oversight, as well as smart contract auditing firms and other related businesses.  Tandon’s company, Chainworks, is already talking with banks about putting loans onto blockchain.

Blockchain opens up a whole arena of potential use cases, and challenges, in the near future.

“After all our whole world is data,” said Hacker. “It’s the new oil, the new value.”

Watch the full session on Blockchain

Listen to Tandon and Hacker discuss blockchain in a full session recording,  How Safe Is Blockchain Really? Continue learning about businesses application of blockchain and similar technologies at BraveIT 2019 on September 19 in New York, NY.