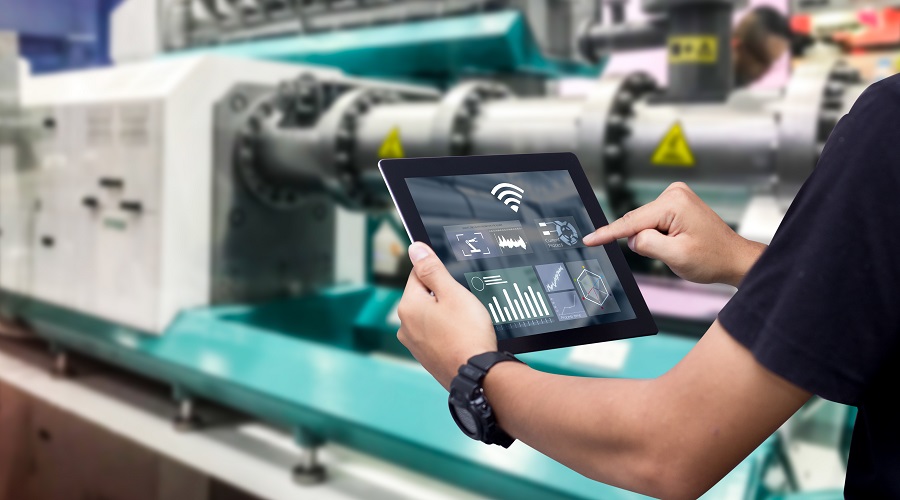 We’ve been talking about the fourth industrial revolution for some time now, an era in which the way we approach and think about manufacturing will be completely upended. In this new reality, supply chain operations will be streamlined, making just-in-time inventory management more than just the purview of the big automotive manufacturers. The Industrial Internet of Things (IIoT) will collect more shop floor data than ever, and increasingly sophisticated analytics will tell us what it all means in the blink of an eye. Artificial intelligence (AI) will even mimic human behavior and activities, allowing manufacturers to decrease workplace hazards and overcome the talent shortage that has been plaguing them for decades. As much as the IIoT, big data analytics, and AI are fueling the next industrial revolution, there’s one vital technology advancement that often gets overlooked: edge computing.

Edge computing in the context of manufacturing

Edge computing simply means moving the computing power closer to the end user. For some applications, such as supply chain operations, that may mean utilizing a data center closer to your manufacturing and distribution facilities to reduce latencies. Data center location matters.

Let’s say, for example, that you have a distribution center (DC) in St. Louis. You have several route carriers operating out of this DC, serving cities and towns throughout Illinois and Missouri. Your product is one that is highly variable based on weather patterns, e.g., camping supplies. A retailer may modify their order several times a day, depending on what’s moving. The faster you can replenish their supply, the more of your products they’ll sell.

By placing the supply chain applications that optimize your on-truck inventories and distribution routes closer to St. Louis instead of in a far-away city like New York, you’ll enable a faster response. New orders won’t have to travel from your Midwestern retailers, to the East Coast for processing, and then back to the route drivers.

While this may not seem like a big deal, a delay in routing a new order from one of your best customers could mean that your drivers restock the shelves of one of their lower velocity stores instead.

IIoT is moving the edge even closer to the end-user, but these users aren’t always human. Let’s look at a couple of use cases for using edge computing in the manufacturing IoT:

When a vital piece of equipment fails unexpectedly, it increases downtime and can create tremendous scheduling headaches as well as lost dollars in scrap and rework. Predictive analytics has been used for years to predict when a machine will need maintenance, allowing schedule managers to work around that planned downtime and avoid the scrap/rework expense.

Unfortunately, manufacturing equipment doesn’t always follow the model. More advanced sensors can detect even minute fluctuations in performance that can indicate problems with product quality or a pending malfunction. When that data is analyzed by intelligence built-into the equipment itself, machines can respond automatically to these minute fluctuations, adjusting as needed or taking themselves offline until a manual re-calibration can be performed.

When this intelligence is connected via an intranet to the rest of the factory or the supply chain via the internet, it can even facilitate scheduling changes to improve production flow – without the need for human intervention.

Moving components and products around is one of the most time-consuming aspects of manufacturing. All kinds of strategies have been tried to make it more efficient (e.g., Kanban, point of use storage, redesigning the factory layout, etc.). Now, some companies are looking at using robots to eventually replace human warehouse workers altogether.

Amazon is probably the most often-highlighted example of an organization leveraging robots in its warehouses, but even so, they still have plenty of human workers doing the actual packing of your orders. That’s because the movement through the warehouse and the packing of an order is an incredibly complex task that involves more variables than most people realize. The human brain can take in these variables (often without even realizing it), analyze them, and respond faster and more accurately than even the most sophisticated robots – at least today.

Scientists are working on identifying those variables, building models, and imbuing warehouse robots with the AI they need to make snap “decisions.” Eventually, they will be able to perform the same work as their human counterparts, making the warehouse a far less chaotic place. This, in turn, will allow manufacturers to reduce motion and movement of parts down to the bare minimum necessary.

Not only will this require an incredible amount of data and computational power, it will also require speed. That means putting the processing power on the warehouse robots themselves, not in some central processing unit that analyzes the data and then gives each robot its marching orders.

Perhaps no other industry has leveraged technology to “do more with less” than the manufacturing industry. While we can’t discount the effect that higher productivity has on employment, people around the world have benefited tremendously from the availability of a wider selection of products at lower prices.

It’s difficult to predict exactly what will happen, but most experts agree that the IIoT is likely to accelerate the trend. The US Bureau of Labor Statistics estimates that the manufacturing sector will lose more than 800,000 jobs between 2014 and 2024. At the same time, they project productivity (as measured by output) will increase by more than 28%.

For individual manufacturers, the mandate is clear. To maintain competitiveness, they will need to leverage the productivity benefits of multiple technologies such as the IIoT, AI, and analytics. And, like adding oil to the machine, edge computing will grease the wheels of advancements in productivity.

Let’s talk about your IT infrastructure